The Sherpa and the Schmuck

A contemplation with Ralph Sutton

My next guest is Ralph Sutton. He is a long-time veteran of television and radio with a large and international fan base. For almost 20 years he hosted The Tour Bus, a rock radio show with a global reach of over 1 million listeners. In 2014 he started The SDR Show (that’s Sex Drugs and Rock and roll), a podcast co-hosted with comedian Big Jay Oakerson, and within months – it reached the #1 spot in comedy on iTunes. As he says, it is not for the faint of heart. In 2016 he launched the GaS Digital Network which now has 21 shows and over 4 million listeners a month. That’s pretty good.

He also co-hosts The Sherpa and the Schmuck podcast, which has a very different feel and focus than SDR. It’s a weekly podcast with a lifelong friend where they try and unravel the mysteries of Life, Health, Wellness, and contemplate which one of them is the Sherpa and which one is the Schmuck. In this episode, we talk about all that and more.

More about Ralph and his shows at: 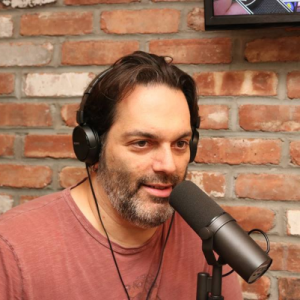