A journey from childhood abuse, to drug addiction, to happiness.

Andrew Mann grew up in an upscale neighborhood in New Jersey. From the outside, he had it made. But behind the scenes, he suffered sexual, physical, and emotional abuse at the hands of his parents, especially his mother. He ended up a homeless drug addict on the streets of Camden, the most dangerous city in New Jersey.
He should be dead. And he has been. But he survived and was revived in all the ways that count. We talk about how he came back to live a fulfilling and successful life without drugs. It’s an incredible journey. His new book, Such Unfortunates, will help you understand addiction and why addicts are the way they are and how to help them.
More at www.SuchUnfortunates.com
Click the book to see it on Amazon.com. 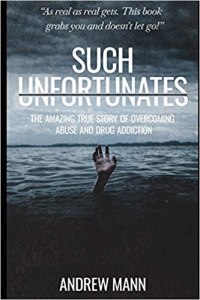